Portfolio > The Problematic Nature of Flatness

".....this is art with wounding force and incurable discomfiting affects: art as activist critique. This is art as interrogation and confession that brooks no doubt as to the identities of the guilty but leaves the vital mysteries unsolved. This is an art of disturbing and decentering contradiction: with words, pictures, and sounds, Eddy made painfully present a past and distant installation that was also a performance, a twisted performance in which nonhumans summoned and played human beings, turning us into instruments of gut and bone, wresting from us the silences and noises of our complicity in a great conspiracy. This is a performance of radical ecology and a sudden archaeological silencing of the anthropological machine. A table is the axis of it all." Mandy Suzanne Wong, Turning Tables: Kathryn Eddy and the Problematic Nature of Flatness 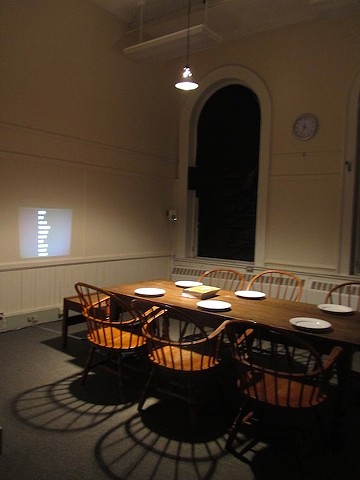 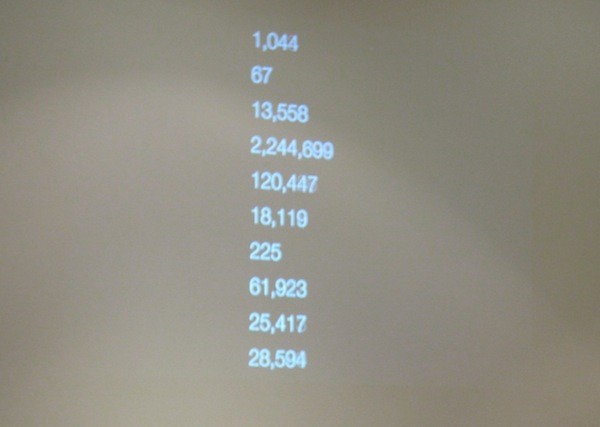 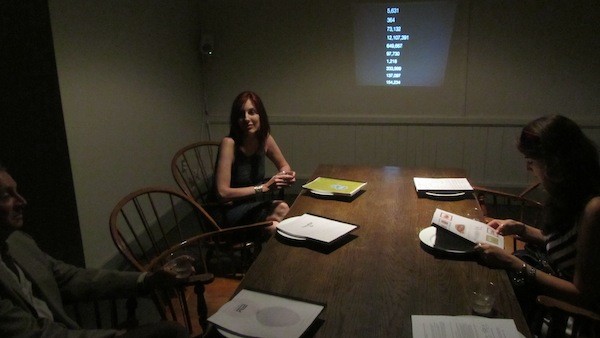 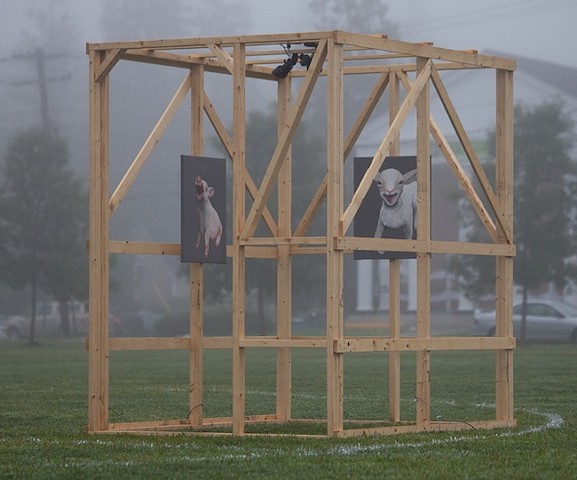 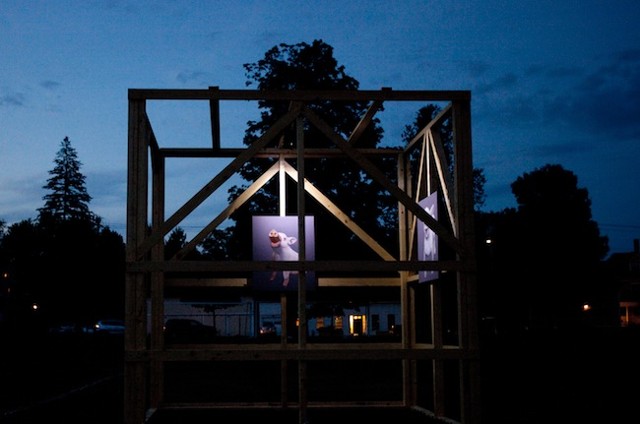 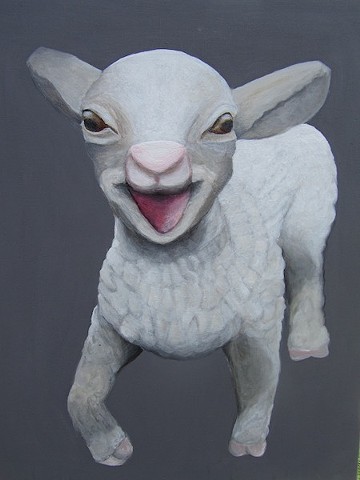 What Became of Your Lamb, Clarice?
Acrylic on Canvas
24x30 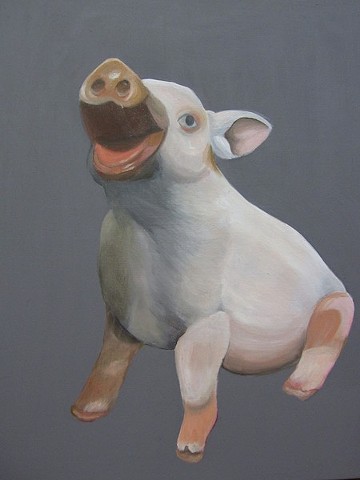 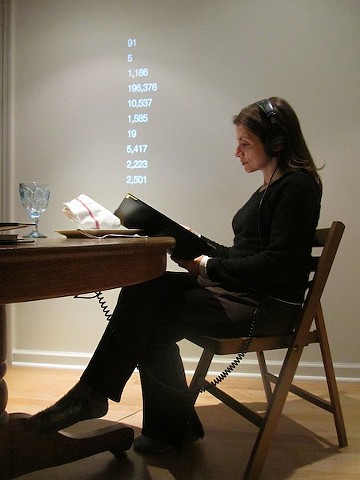 The Problematic Nature of Flatness
Alternative Installation with Headphones 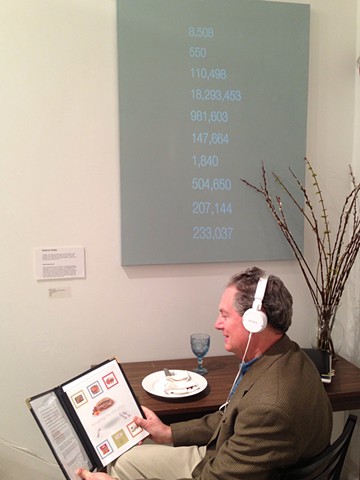 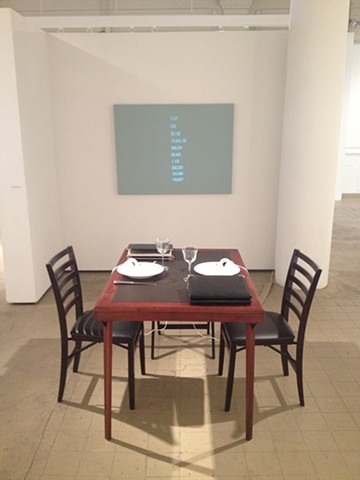 The Problematic Nature of Flatness
Installation view
aljira: A Center for Contemporary Art

The absence of farmed animals from our everyday experience has created the environment and opportunity for capitalism and animals to collide. This work brings animals back into the room where we can listen to them in their own language; whereas, the painting, sculpture, or photograph can only rely on what the artist sees. It is through our thorough engagement with animals and our becoming attuned to them, that we can begin to understand and overcome our limitations as rational human beings. By bringing the sounds of our food animals into the room, I use the inherent power of sound to bring the voices of the absent animal back into our minds and hearts.

In Ron Broglio's book, Surface Encounters:Thinking with Animals and Art, he writes about the long held and incorrect assumption that humans are separated from animals by the fact that we have an interiority and emotional depth and animals do not have depth and live their lives on the surface. Throughout history, many injustices towards animals have been justified by this belief. On the other hand, artists have always portrayed animals by dealing literally with their surface (flatness) i.e. painting them on canvas, photographing their exteriority, sculpting their shapes and forms, etc, in an effort to better understand our animal human relationship.

The Problematic Nature of Flatness includes an 18 track, 4 channel piece comprised of animal voices recorded at sanctuaries throughout the northeast. On the wall behind the table, is a running kill counter, which counts in real time the numbers of farmed animals killed for food worldwide. On the table, disguised as menus, are the 2011 annual reports of leading agribusiness corporations and plate/table settings. The viewer listener sits at the table and is asked to listen to the voices of farmed animals while perusing the menu. The table and menu represent a place where individual choices of what we eat are made; the annual reports represent the corporations that are actually making the choices that affect our health and environment. The kill counter, with its growing numbers, represents not only the animals caught up in the system but the money being made every second. The piece asks the viewer to consider who actually makes the choices when it comes to what we eat.

Outside stands a simple wooden structure, a human sized cage approximately 7 feet high, 7 feet long and 5 feet wide. Solar powered spotlights, shining from the slatted roof, highlights the structure at night. Inside the space and open to the elements, two paintings (flatness) of toy plastic farm animals are hung. By painting the plastic farm animals, as opposed to painting the animals themselves, the piece explores how we use idealized toys as a way to further separate from the real animals and their suffering. The idea is that this structure will be forgotten and left outside just as the animals that I am referring to are absent from our everyday lives. It is also a nod to the inferior and often forgotten place of animal art in the history of Western art. Furthermore, by removing the paintings from the gallery setting, the outside structure could be seen as a deconstruction of painting itself. The inconvenienced viewer walks out into the field and into the crowded confined space to view the paintings, thus creating another immersive and performative space that mirrors the often forgotten confinement of the animals.